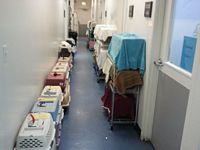 Feral Fixers brought in 63 cats to the PAWS-Chicago Spay/Neuter clinic today to be fixed. 36 of them were ferals while the other 27 were 'friendly ferals'.

This is the largest load we've ever done in a single day. We needed three cars/vans to carry the cats to PAWS and back and the help of several volunteers.

Along with myself, super-volunteers Julie, Connie and Mary helped load up cats into cars this morning, drove them down to PAWS, brought them into PAWS, helped with the paperwork and then, this evening, went to PAWS with me to pick up the cats and drove them back to Tammy's for recovery and return. Super-volunteer Judy was at Tammy's last night and tonight helping with the myriad of chores necessary to get this all done and super-volunteer Sue was at Tammy's tonight, helping with the paperwork and cat distribution. She once again loaned us the use of her van - something we really needed today. 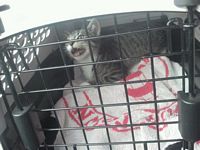 Four of the friendlies were deemed not healthy enough for surgery - they will be held for a future trip. And, sadly, we lost two cats today. One was a feral and was desperately ill when we brought him into PAWS. He had an obviously infected tail and seemed to be in a lot of pain. Once the vets examined him, they determined that the infection was spreading to the rest of his body. There really was no cure and the cat was in misery, so the difficult decision was made to euthanize him. So, while sad, it was not a shock. The other cat passing was a shock, however. It was a kitten from a batch of kittens. It seemed healthy during the checkup and went through the surgery fine, but died while in recovery, despite the best efforts of the PAWS staff. The other kittens from the group all came through fine. So, while we very happy in getting this many cats done, the day had a sad note to it too.

(Pictures from the super-volunteer-tag-team of Julie & Connie. Click on the thumbnails to see a larger version.)

Update November 16th - we just noticed on the paperwork that 2 of the cats had already been spayed, so we're removing them from the totals. Now 100 for the month, 871 for the year and 3,352 overall.)