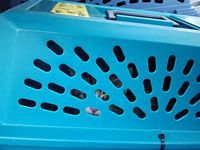 Today, Feral Fixers brought in 45 cats to the PAWS-Chicago Spay/Neuter clinic to be fixed. 26 of these cats were feral while 19 were 'friendly ferals'.

Such a large load of cats deserves lots of thanks for lots of volunteers. Super-volunteers Sue and Judy helped Tammy get the cats ready on Tuesday night. Super-volunteer Sue once again loaned us the use of her van so that we could take in such a large number of cats. Super-volunteer Judy was at Tammy's tonight, helping to distribute the cats and get the paperwork done. And the super-volunteer tag-team of Julie and Connie drove down to PAWS with most of the friendlies and then picked them up from PAWS this evening to take them back to Tammy's. They also greatly helped me with loading / unloading the ferals and getting the paperwork signed, filled-out and distributed to the proper cats. Doing it on my own, 45 cats would have literally taken me hours to unload, bring into PAWS and to get all of the paperwork done. With the three of us working on it, we had it done in under an hour.

Thank you again one and all! 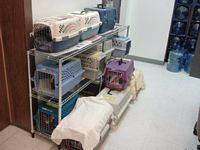 And, in addition to the 45 cats we brought in, we also brought back the 'rabies-hold kitty' that I wrote about in an earlier post. This was the cat that absolutely refused to be anaesthetized, escaped into the clinic and then bit right through the 'cat handler' glove that Nicole was wearing as she attempted to pick it up, giving her a nasty bite. Nicole was very happy to see this cat go home this evening. While this cat was at PAWS, it was kept in a larger cat cage - they were not going to keep it in a trap, of course, for the 10 days in observation. Getting this cat back into its trap to take it home, however, proved to be a bit of a task. It took 3 of us to do it; Shannon getting everything in place and organized and giving directions, me holding the trap and Nicole shooing the cat from the cage into the trap. We couldn't get the trap to stay open - I have no idea how it was able to trap this cat - so I had to hold the trapdoor open with my hand. In addition, it was a very large cage, very unwieldy to handle. But eventually the cat did get into the trap, I was able to let go of the door, and we got it back to Tammy's to be returned to its colony...

With these first 45 cats of November, Feral Fixers has now processed 816 cats for the year (blowing right by the 800 mark) and 3,297 overall.

(Picture thumbnails are from the day's activities. The first is of one of the friendly kittens in his carrier while the second is of some of the carriers in the back room of PAWS, waiting their turn for surgery. Click on either of the picture thumbnails to see a larger version.)