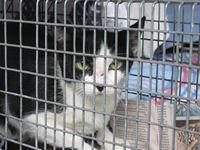 Meet "Larry the Feral Guy" (with apologies to "Larry the Cable Guy"). He is/was our designated "3,000th cat". At least the caretaker (in Downers Grove) thought that Larry was a "he". Turns out that Larry is a "she" - oops! No wonder he was such a hostile feral - people kept thinking she was a guy and that made her mad! Maybe when her name is changed to "Laura" or "Lenore" or "Lena" or something like that she'll mellow out a bit...

"Larry" was part of a group of 30 cats that we brought to the PAWS-Chicago Spay/Neuter clinic today; 18 of them were 'friendly ferals' while the other 12 (including "Larry") were true ferals. I picked the cats up from Tammy's this morning and drove them into PAWS and then picked them up from PAWS this afternoon and brought them back to Tammy's for recovery. Once again we are indebted to super-volunteer Sue for loaning us the use of her van so that we could transport the cats in one load (Thanks Sue!). And, thanks again to super-volunteer Judy who was at Tammy's both this morning and this evening to help out with the entire process (Thanks Judy!). 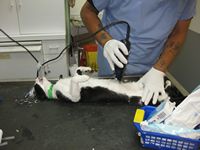 3,000 cats is a lot of cats in anybody's book. We know we've made a difference because the intake of ferals at DuPage County Animal Care & Control continues to drop - now down a full 50% from their peak of two years ago. And to do this many cats takes lots and lots of players.

There is a lot of credit to go around for this. First of all to our President, Tammy, for keeping all of this going; finding volunteers, coordinating efforts, doing fundraising and all the other myriad things she does to keep Feral Fixers on track. Special thanks to super-volunteer Judy who has become Tammy's alter-ego and right-hand "man". A humungous thanks to all of the other volunteers who have helped make this happen and kudos to the colony caretakers who work with us to make TNR the norm and not the exception. 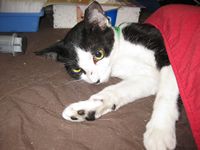 WE COULDN'T DO WHAT WE DO WITHOUT YOU - THANK YOU!

(The three photo thumbnails are of Larry, of course. In the first, he is in his trap, awaiting transport to PAWS. In the second picture, Larry has been anaesthetized and the PAWS tech is shaving Larry's belly in preparation for surgery. And, the third picture is after surgery, when Larry is waking up. If you click on any of these thumbnails, you'll see a full-size version of the picture. And, if you visit our Photo Album page for 3,000 cats, you'll see several pictures taken during Larry's surgery process.

We are very grateful to Shannon Gillen for taking the great majority of these pictures. Shannon runs the day-to-day operations at the PAWS Spay/Neuter clinic and every TNR group that works with PAWS absolutely loves her! She has made the feral processing procedures more efficient and more 'TNR-group friendly' at the same time. Plus Shannon is very knowledgeable, has a great sense of humor and is a real joy to work with. Thanks Shannon!)