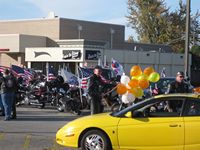 Earlier today, Feral Fixers held its first annual "Shop For Strays" - Feral Fixers Bazaar event in Villa Park. The event ran from 10am to 2pm and was held at the VFW Post on St. Charles Avenue.

About 20 vendors were represented and many people came out to view their wares. Everyone seemed to have a good time and I think it is safe to say that we'll probably do this again next year. Many thanks to super-volunteer Lauren for doing the 'heavy lifting' in organizing this event - Thanks Lauren!

Photos from this event are now on our Flickr Photo Gallery for you to enjoy.

Oh, and why is the picture in this post of a bunch of Motorcycle riders and some balloons? Well, you see, these balloons were part of the decorative atmosphere of the Bazaar. One of the vendors was going to take them home with her, but at the last minute she decided she didn't want them. So, what to do with them? It seemed a shame to pop them and throw them away. As we were discussing this problem, a lady walked in with her daughter, looking for the manager of the VFW hall, so that she could book an event. I was able to give a few balloons to her daughter, but still had most of them left. However, I noticed these motorcycle riders in the parking lot and went over to see what was going on. It seems that they were all veterans and they were gathered to celebrate somebody coming back from Iraq or Afghanistan (I didn't know which). I asked them if they wanted the balloons to take to the party they were having later and they said yes! The picture is the result... If you want to see a full-size version of the picture, just click on the picture thumbnail in this post or visit our Photo Gallery.