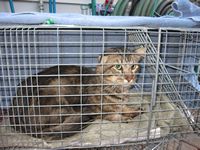 Today, Feral Fixers took in 18 cats to the PAWS-Chicago Spay/Neuter Clinic to be TNR'd. Eleven of these cats were ferals while seven of them were Friendly Ferals.

New volunteer Arlie joined me this morning to take in the cats (Welcome Arlie and Thank You!) while I picked them up in the evening and took them back to Tammy's for recovery.

One of the Ferals is named Ray (actually, "A Star Ray" on the Check-in form) and he had a problem. I am told by super-volunteers Julie and Connie that he was the 'boss cat' in his area (he's a big old Tom) but he finally ran into something he couldn't handle. His left rear paw was bleeding and he was limping and Feral Fixers, once again, asked the PAWS vets to do us a favor and take a look at it (and, maybe, see if there was anything they could do with it).

The injury turned out to be a severe bite-wound (confirming Tammy's suspicion) and the PAWS vets determined that an amputation was the only option. They took off as little of the paw as they could, cleaned and stitched it up, and gave him a shot of Convenia (a long-lasting antibiotic). They also attempted to fit him with an E-collar (an Elizabethan collar - one of those plastic cone thingys that go around an animals neck after surgery and is intended to prevent them from licking or picking at their wound). However, Ray was having none of it. The PAWS vets thought that he would still have a chance if he would just let the wound heal - but if he bit out the stitches, it was certain to get infected - and then he'd be in trouble again. 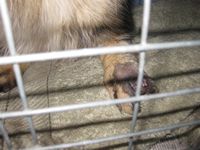 So, right now, Tammy is keeping him inside and we're all hoping that he'll cooperate in his own recovery.

He's a really mellow cat (especially so for a feral), letting me pet him while he was in the trap. I'm told that "they" (can't remember who) were thinking of bringing him inside anyway, so hopefully, it's all going to work out in the end.

So we owe another HUGE THANKS to the people and especially the Vets at PAWS - they really are heroes - THANK YOU PAWS!

And THANK YOU Tammy for holding onto this cat to give him a chance.

The picture thumbnails (click on either of them to see a full-size version of the photo) are of Ray of course - in the first one, you can see this cat has been through some battles - his right ear is almost entirely gone. The second picture is the best close-up I could take of his amputated paw. I must admit that seeing something like this close up makes me a bit uncomfortable, but I am happy to know that he's now being given the best chance to recover and live out the rest of his life in comfort. Let's all keep our fingers crossed...