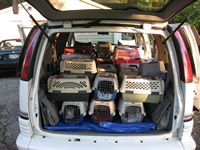 Yesterday we processed the 'first installment' of the 50 kittens that we are working on - the kittens that have inspired our "June is for Kittens" fundraiser.

We brought 29 cats to the PAWS Chicago Spay/Neuter clinic; 22 of them kittens. We had several more (10+) we wanted to bring, but they are suffering from URI (Upper Respiratory Infection) and it will take some days of antibiotic treatment before they are ready to go. There are also several other batches of kittens nearly ready to take to PAWS.

URI has been a real problem this year - more so than in the past. It's hard to say why. June has been very damp - perhaps that has contributed to the problem. Or, maybe it's something else entirely. Anyway, for whatever reason, URI has been an issue and is causing a crimp in the 'production line'. And, as a partial indication of where we are working with colony caretakers, these cats came from Lombard, Westmont, Hanover Park, Addison, Downers Grove, Elmhurst, Bensenville, Wood Dale and Glendale Heights. 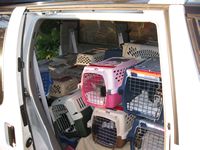 One of the 29 cats we brought to PAWS was judged to be 'not satisfactory' for surgery. While it was most unfortunate to not be able to (yet) spay/neuter this cat, we are very grateful that the PAWS procedure calls for a veterinarian to exam each friendly cat before they are accepted for surgery. The surgical procedure and, especially, the anaesthesia, can be very hard on cats - they have to meet the vet's 'minimum standards' before they are accepted for surgery. One of our volunteers will work on getting this kitten 'up to snuff' so that we can get it spayed/neutered in the very near future.

We have one more day open for our 'June is for Kittens' fundraiser. If you have wanted to donate, but have not yet done so, NOW IS THE TIME to do so - Thank you!