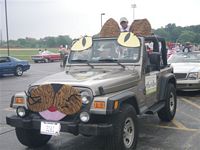 Like the recent DuPage County Friends Fur-ever festival, the Memorial Day parade was rained out. Mary gives us this summary of the events... 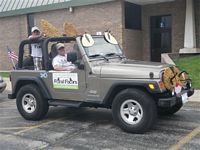 We were lined up before eleven o'clock and ready to go and then the Fire Department said a severe storm was heading our way. It started raining really hard so we waited under the canopy. Everyone put the tops up on their vehicles but I didn't have mine (not too smart). Finally the parade started, but lots of people had left. It was pouring hard, the sky was real dark too.

We traveled a few blocks in the parade and then left too. We went to a gas station and waited under their canopy. The parade actually continued, I think, but lots of people left; all the walkers and the bagpipe guys left too - we drove back that way on the way home.

I think I had two inches of water in my jeep, had to pull out the plugs to drain it. Next year I will fold back the top and leave it on! 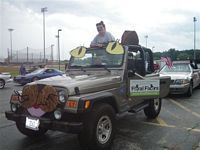 Thanks for the attempt Mary - and, I have to say - that is one spiffy looking jeep!

I've included some thumbnails of photos taken before the downpour occurred. If you click on any of them, you'll be able to see a larger version of the picture.