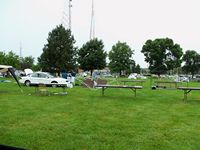 Well, as anyone who tried to attend already knows, yesterday's Friends Fur-ever event held by the Friends of DuPage Animal Care & Control was a complete washout.

The flyer said that the event would be held "rain or shine", but that did not include "tornado warning" or "lots of lightning". For a few minutes right around 10:15 or so, things looked pretty dicey. We were frantically trying to set up the tent so that we wouldn't get wet from the onrushing rain clouds, when an announcement was made that everyone (including the animals) was to get indoors in the underground shelter because "60 mile an hour winds and hail" were imminent. Just as super-volunteer Laura and I were getting stuff ready to bring back to our cars, a gust of wind came up, grabbed the tent in the space next to ours, and blew it on top of Laura! I heard this muffled scream "Help! Ted! Arggghhh!" (or maybe it was "Ted! Help! Arggghhh"). I quickly dropped the stuff I had in my hand and raced to pull the tent off of Laura (maybe it was "Help! Arggghhh! Ted!"). Fortunately, outside of a bump on her head, Laura was fine. 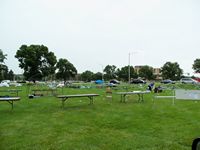 We all hung around for 40-45 minutes or so, waiting to see what would happen. The rain continued intermittently and then we (all of us there) decided to call it a day. There were some pretty dramatic lightning bolts and I must admit that I was bit concerned as Laura & I (quickly) walked out to the exhibition field to pick up our stuff.

So, no event, and no fundraising for us. Bummer...

Included in this post are thumbnails of two pictures that Laura took once the first set of rain-clouds passed. If you click on either one, you'll see a full-size version of the picture. As you can see, the wind really played havoc with everything...