Four and four for today...

Just another Sunday at the PAWS-Chicago Spay/Neuter clinic - 91 spay/neuter surgeries plus all of the shots they had to administer to the animals and a couple of 'full dentals' they had to do thrown in for good measure...

Today I brought eight cats into PAWS as part of their TNR (Trap-Neuter-Return) process. Four of them were ferals while the other four were "friendly ferals".

Once again, we had to have some 'special treatment' for some of our cats; three of the friendly-feral kittens were adjudged to be too young/small to have the rabies vaccine administered. We had also requested a shot of Convenia (a long-term antibiotic) for one of the male ferals that had some wounds on him. And, of course, we have PAWS insert a Feral Fixers microchip instead of the PAWS microchip.

And once again, all was handled correctly - no muss, no fuss and no mistake. When I arrived at PAWS to pick up the cats, the paperwork was waiting for me. While I went through that to make sure everything was ship-shape, they brought my cats out to the reception area so that I could load them into my car (and then they helped me carry the cats out to my car).

We love you PAWS! 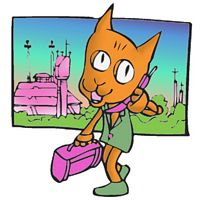 T-Bone, the "longest cat", mentioned in the President's letter this month, is going to a shelter on Monday. Yea! Thru trial and error, mostly error, it was determined that Mr. T-Bone only liked beef canned food and it had to be the morsels in gravy and it had to be served to him in the can. Not on a plate, not in a bowl, but still in a can. No wonder he was so skinny when he came to us!

Thank you so much to volunteer Judy M. for arranging this placement with Heartland Shelter! He is sure to entertain all he meets with his conversational skills!

Another cat that we received only a few days ago, was spayed today and will be going to another shelter that agreed to take her thru the hard work of Judy M. PeeDee, so named because the staff at the police department were her caretakers, is a lovely stray who will make a new family very happy.

Please keep all those positive vibes coming our way, they are certainly helping!