Feral Fixers at Bensenville's Music In the Park

On Wednesday evening, June 24th, Feral Fixers hosted a booth at the city of Bensenville's Music In the Park festival. This festival is a summer long event, happening every Wednesday, where the Village of Bensenville hosts a music band, booths, a car competition and show, etc. Feral Fixers had a booth at several of these events last year and is again honored to be invited to participate this year.

Feral Fixers enjoys a very good relationship with the Village of Bensenville. We are now the ones the Bensenville Police Department contact when someone in their village calls them with a Feral Cat issue. We have held a TNR Workshop in Bensenville, been on their public TV and have been in their Fourth of July Parade (and will again be this year). 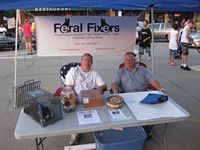 At this evening's Music In the Park, Village Trustee John Adamowski stopped by to say "Hello". John is pictured here, on the right while yours truly is on the left. John was first elected as a Village Trustee in 2003 and has been part of the Bensenville Community Development Commission since 1997. He has also taught science at Fenton High School since 1981, is a Boy Scout Camp Director, a coach, etc., etc., etc. He's one of those people who the term "Pillar of the Community" was coined for. It was a real pleasure to spend some time talking with John about Feral Cats, village issues, etc. and I am very grateful that he took the time to stop by.

The Bensenville Music In the Park concert series continues through August 19th. Feral Fixers will be appearing at some of these event (watch our Calendar) - come by and say hello!