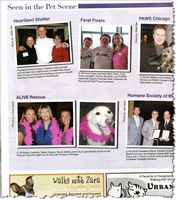 Chicagoland Tails is a free publication put out by the Tails Pet Media Group. It's available at the PAWS-Chicago Spay / Neuter Clinic where we take 'our' feral cats to be fixed and I always look forward to the latest issue.