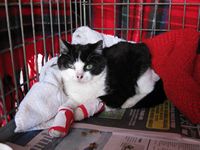 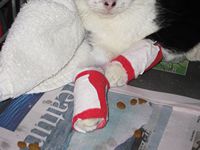 We didn’t set out to break records at the beginning of March, but that is certainly what we have done!

In February, I counted up all the “outstanding” cats that we had on our books. Some new colonies, some from last year, many that had not been TNR’d due to weather, etc. When that number came out to be over 100 cats, we approached PAWS for more slots. They were extremely accommodating and offered us several dates where we could bring in 20+ cats at a time.

Well, in March I had a vacation from my “real” job. That meant that we could do even more cats than normal, without those hours missing from every day!

Usually you say thank you at the end of a piece, but I would like to thank everyone now – please forgive me if I miss anyone!

Assuming approximately 4 kittens per litter, an estimated 300 kittens were prevented just in March!!!

During the same month of March, the PAWS-Chicago Spay / Neuter clinic, where we take the cats to be fixed, set their own record with 1,548 spay/neuter surgeries, of which 443 were ferals!

Our favorite stories include:

This is a video showing what a drop-trap is and how it should be used.

There are some individual cats that we encounter who we wish could tell their own story:

March has been an incredibly hectic and exhausting month. It may take some time, but we hope to see the results of our hard work by the end of the summer with fewer kittens born all over DuPage County because of our efforts. It would be extremely difficult to keep up this pace, but with your help we have certainly made a huge dent!