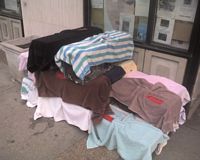 Yesterday we processed 15 more cats at the PAWS-Chicago Spay/Neuter clinic bringing our monthly total to 107. That's a lot of cats in anybody's book! This first picture is of the cats stacked up outside the clinic while I was waiting for my name to be called to check in - the PAWS clinic was packed and there was no place to put them inside. 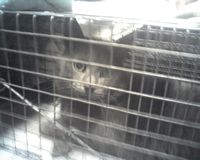 The 100th cat we did this month was a gray, male cat from Lombard named Babar. This picture of him in the trap was taken after I had brought him back from the PAWS clinic. I love the gray cats - the color is so cool and they look so regal.

I did the transport both ways today. There is an alley directly next to the PAWS clinic and it's fairly heavily trafficed. But this was Sunday and there were no parking places open near the clinic so I took a chance and parked in the alley while I unloaded the cats. I was lucky and no one tried to get through the alley while I was unloading - nor did I see any police cars. When picking the cats up, I was able to, again, find a parking spot in front of the clinic to load up. I do think the new parking meter rates I wrote about earlier is definitely helping matters here - the spots open up fairly frequently and, with just a little bit of patience, you can find a spot. It sure is easier than carrying the cats all the way around the building and to the parking lot in back.

This brings our yearly total up to 151 cats and our overall total up to 764 cats. We're starting to take bets on when we process our 1,000th cat! ☺