We are finally able to do large numbers. DCAS is starting up their mobile unit and we can do 20+ cats in one day with just them, once a week. ADOPT has been a huge help this year, giving us 5 to 15 slots a week as we have neutered cats from finite situations where the weather did not have as much impact. We will continue to use ADOPT s/n slots when we can and need to do more. Another TNR group had their s/n source become completely unavailable for weeks – Yikes! We are definitely doing as many as we can, as early as we can to accomplish as much as we can in the shortest time period while we have the resources. Hopefully this is the last dip into the lower temperatures we will see until Fall, keep your fingers crossed! 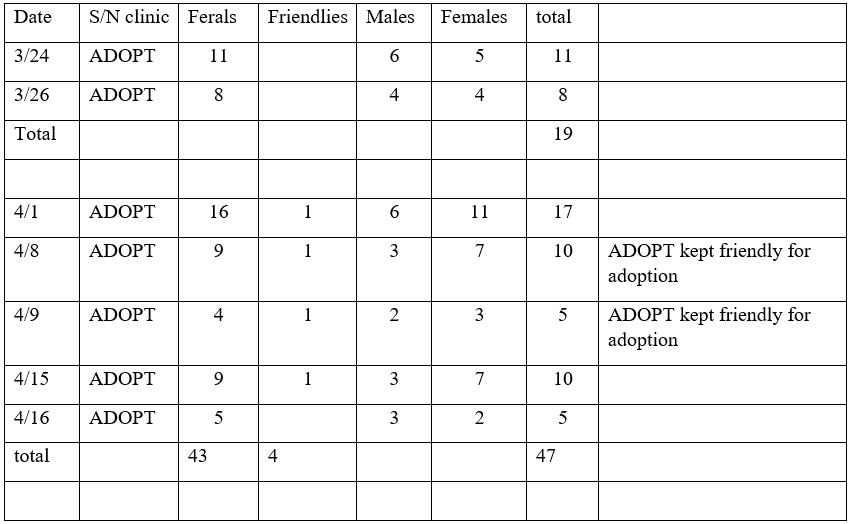 We are now doing our best to do TNR out of the building and not have cats stay at my garage – so far none have been shipped out from my garage this year! We're changing the flow so that cats arrive Tuesdays 3pm – 5pm and all ferals need to be to the building by 4pm on Wednesdays for the next day's trip for s/n. This will hopefully reduce the stress on everyone! Thursdays will be our target day with additional on Fridays if we can get the slots and need them. Last year was way too stressful and the building will give definite parameters to follow! We neutered an additional 19 cats in March, for a total of 21. We have neutered 47 cats so far in April. This brings our year total to 89 cats and 12,538 since our start!

Bunny update – while not totally feral, Bunny did not seem to want to come inside and was returned to his caretaker when he was healed up. She will continue to care for him and hopefully he will not get in any further trouble! We think a bird of prey caused his wounds as we had another cat show up with even more severe injuries from the same general area.

All of our traps are out. We hold onto a very few for those caretakers who bring us cats in carriers and crates so that we have something to transfer the cats into for the trip to the clinic. Recently, a trap was returned that the individual had kept since 2016. You can imagine how difficult it is to track all the traps in addition to locations and cats. People want to hold onto one "just in case" and then forget to give it back to us when that additional cat never appears. If you've seen our Where We've Helped map, think of the 2,500+ locations over 14 years, we've done so much with finite resources. Please return traps and think about donating more so that we do not have to postpone a location due to lack of traps.

In 2019, New York became the first state to ban onychectomy. The procedure is now prohibited in 10 additional cities in the U.S., including St. Louis, Mo., Los Angeles, Calif., and Denver, Colo., as well as in seven Canadian provinces. This can be a hot topic, we are not looking to stir up controversy but to share information that shows changes are happening in the feline world. Read the story about Austin here.

As mentioned, we are shipping cats out of the building to s/n appointments! Crazy how much smaller the building is getting as we use it more and get more equipment! When the kittens are large enough for adoptions, they will take place at the building more and we will start housing adoptable cats there as well. Everything takes time. We recently hosted two socially distanced foster volunteer dinners at the building and it went very well. Cages for our ISO room will be showing up in the next week or so – that cost will be covered by our Fund Our Ferals Future fundraisers – Our Giving Grid Campaign and the DuPage Giving Days Fundraiser kicking from April 26th to April 30th. To give you an idea of our expenses – the cages for that one room are $8,000+. Every dollar donated helps!

We'd like to thank K-M Seamless Gutters for their pro bono work on cleaning out our gutters. We had some massive icicles hanging from the gutters and ice covering our door locks, but after a good cleaning it was resolved. We've encountered many generous vendors as we've taken on building ownership! While we may just want to neuter cats, so much more goes into that goal than we ever imagined!

It has been so long since we have gotten food from Rescue Pack – the shipments have been minimal due to need in other areas, some has gone directly to human food banks to support those people who do not have the resources to purchase food for their pets during the pandemic. Donations such as these help our ferals so much – we use the food for trapping and to support those caretakers who cannot afford to purchase food with their limited incomes at this time. So many people play a part in this – Purina was the main manufacturer this time, GreaterGood who facilitates these donations, Rescue Pack who schedules 80+ organizations to pick up food in a two hour window of time, Goggin Warehousing in Carol Stream who hosted the distribution, Todd Grunke, manager of the UHaul Dealership donated the use of the truck for picking up the food, Kim, Keith, Karen & April who unloaded and moved the food into other vehicles for passing out and storing. This was almost 4,000 lbs of canned food which should last a very long time. And, of course, we pay the shipping costs (minimal compared to the cost of the food) and we couldn't do that without your donations!

We received these on March 31st from our Amazon Wish List - no tag with the code to thank the donor in the box ☹️.  These are great food and water bowls, these larger ones and we also received the smaller ones that are perfect for kitten crunchies!

Thank you to everyone for supporting us!