We first rented our storage unit in 2013 after "The Flood." It was a great deal, we were happy. Then the rental cost went up every year. Low and behold, there's a Public Storage on the corner, less than two blocks from the building! Indoor facility, so the unit door won't ice up, and we're starting out 40 bucks cheaper a month. It turns out, you don't have to pay the insurance fee if you have other insurance, so we're paying a $22 per year addition on our Feral Fixers insurance for off-site storage, instead of $180 to Public Storage for the next year! We have so much equipment that doesn't get used year-long, we need this! Hmm, would anyone like to donate specifically for our storage unit? After whittling away at it, that is $144/mo 😊!

This is not everything we'd like to store here. 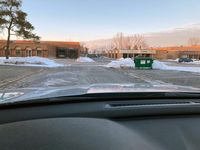 Not earth-shattering change, but we now have a dumpster! And a contract for our snow-plowing! I'm figuring that most people don't have any idea what those things cost when you own a building? A 2-yard dumpster – smallest possible, picked up twice a month (least frequency) is $64/month. The snow removal, now, that was an eye-opener. Over 2", shovel the walks, de-icer spread, that's $124 a trip. Additional cost for heavier snowfalls. We needed someone we could rely on completely to get the job done, so the friend of so-and-so's uncle's next-door neighbor wasn't something we felt we could do for now, but we may be open to discussion for next year 😊! Again, these are consistent expenses, and any help with them would be greatly appreciated!

While we are not actively trapping, things happen. One caretaker did not get the memo and brought an older kitten (past taming) into his bathroom and wanted her spayed. Another feral had severe bite injuries to both front paws and one ear but was otherwise healthy. Our LAST two kittens from 2020 were ready for s/n!

On 1/21, one feral female went to ADOPT; caretaker was going to house her in garage til she could be let back outside. On 1/27, the injured male feral was neutered and cared for at Glen Ellyn Animal Hospital. On 1/29, two friendlies, one male and one female, were neutered at ADOPT. The January total is 4 cats, year-to-date is four cats, and our total since our start is 12,453! We do not plan to do additional surgeries until the end of February, and those are situations we already know about. We will still be saying no, wait until the end of March.

Ziggy is the feral who was neutered at Glen Ellyn Animal Hospital, and at the same time his injuries were cared for. Winter is very hard on us at Feral Fixers, so many animals end up sick and injured at the end of the year – it's like they have used up all their oompf. We don't usually neuter cats at Glen Ellyn; they cannot discount a neuter surgery as much as the high volume clinics dedicated solely to s/n; we try to do just a few a year and weigh the need to sedate more than once against housing an unneutered cat and the additional cost. Planning a Facebook fundraiser for Ziggy as the cost for the treatment and the neuter will be about $475. It sounds like a lot but has been life-saving for Ziggy. As with most ferals when first coming in from the outside, he ate like crazy after surgery but has since relaxed and started eating a normal amount now. No indication that he wishes to be an indoor cat, but we'll see. That shouldn't always be what we rely on to make our decisions.

"Rubbing against catnip and silver vine transfers plant chemicals that researchers have now shown protect cats from mosquitoes. The results also demonstrate that engaging with nepetalactol, which the study identified as the most potent of many intoxicating iridoid compounds found in silver vine, activates the opioid reward system in both domesticated felines and big jungle cats. While nepetalactol had been previously identified, these studies directly illuminate its extremely potent effect on cats. And by revealing the biological significance of well-known feline behaviors, the study opens the door to further inquiry into how nepetalactol's twin effects - pest repellence and intoxication - may have driven the evolution of these behaviors."

I had never heard of silver vine before this article – it's indigenous to China and Korea, but since this article, I have seen advertisements of cat toys made with silver vine. I had also heard of people rubbing catnip on themselves to repel mosquitoes. So glad there has been more research on the effects of catnip – there's a reason for everything! Plant a patch for your ferals!