With our adoptable cats being primarily adults at this point in the season, it was a calmer, though still productive adoption event today. It was nice to be back at our regular PetSmart location in Wheaton. We had a great line up of cats including Alamo, Arthur, Monica, Midas, Wilson, Rusty, River, Boots and Ruthie.

There was a good amount of foot traffic and resultant networking with folks about our organization. We also passed out flyers to several interested adopters. 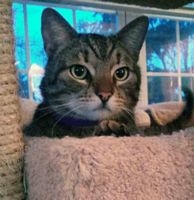 We have a very strong lead on a family interested in Wilson. They have 2 cats currently and recently lost a 17 yr old black cat with much the same personality as Wilson. The gal held Wilson for quite some time and then left the store saying that they weren't quite ready to adopt. So we were surprised when she came back a second time to see him again. There was obviously a strong connection! We will be following up to see if this will be Wilson's forever home.

I am also happy to report that Morgan (one of our wonderful FIV+ boys) was adopted today by a couple from Bensenville. They did not have any pets currently, were looking specifically for a Maine Coon male, and Morgan's sweet personality won them over.

Set-up for the adoption event occurred in record time as a result of the help of many wonderful volunteers! I originally thought that Lauren and I would be alone for the set up, but Sara, Bethany, Laurel, Toni and Edie all showed up and pitched in to help. It was wonderful. Marissa and Maureen arrived soon there after with all of their and Judy's foster cats. Debbie and Judy arrived later in the afternoon and stayed to help with the clean-up along with Lauren and Maureen. Many thanks to all!

Upcoming events include our Kitten Shower on Sunday, 6/12, 12-4pm at the Villa Park VFW Hall and the Shred for Rescues event on Saturday, 6/25, 9am-1pm at Citadel Information Management in Westmont. We may also have another adoption event on Saturday, 5/28, pending the number of available cats & kittens for the event - please stay tuned.

Thanks again to all!