21 more today - plus the story of Nola

Feral Fixers sent in 22 more cats to the PAWS-Chicago Spay/Neuter clinic today to be fixed. Feral Fixers president Tammy gives us the details of the day's trip: 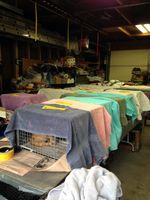 We sent another 22 cats into PAWS today, 20 ferals and 2 friendlies. Debbie and Charli handled the morning trip into PAWS and Dedra and Debbie managed the PM trip. There were 12 males, 10 females of which one was already spayed. The other friendly female unfortunately tested positive for FIV. Nola had been trapped with her four 6 week old babies and was actually in attack mode during the process. She got to the garage, was separated from the kids and never looked back, becoming vocal and asking for attention the whole day long - she had done her job, they were safe, finally SHE was safe and now she could ask for a home! 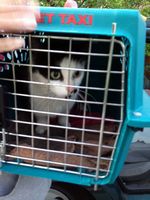 She seems to be in excellent health, we're hoping someone will be able to look past that virus status and give her the right home. In regards to the FIV status of the kittens, research has been done that indicates that the virus does not cross the placenta and the digestive system of the kittens also seems to protect them from acquiring the virus, see this excerpt:

Transmission of FIV - the real story

'Interestingly, this is confirmed by the fact that kittens born to an FIV+ mother are rarely infected with the virus - although the kittens are not infected directly in the womb, as the placenta will protect them, the virus is present in the mother's milk, so all kittens will have prolonged exposure to the live virus in their digestive systems, yet it is very uncommon for the kitten to actually become infected - this is testament to how effective the mucous membrane must be in preventing transmission.

It is for these reasons that the often prescribed "keep separate from other cats" is NOT valid. FIV cats can live communally with non-FIV cats with very little risk of the virus being transmitted between them - unless the cat is a fighter and gives another cat a serious bite, which is rare with properly introduced household cats. The vast majority of cats, once neutered, will not bite other cats they live with - they may play and scrap, but this rarely leads to the serious bite required to inject the virus. There are numerous examples of households with large numbers of cats living together with FIV+ cats without the virus being transmitted (see a few here). A slow and careful introduction is required when bringing any new cat into an existing household, especially so with an FIV cat."'

Thank you to our transport super-volunteers Debbie, Charli, Debbie (again!) and Dedra! Click on the picture thumbnails (one of Tammy's garage before the cats were loaded into the vans for transport and one of Nola) to see a full-size picture.