Microchips are forever - the story of Patches

I've often posted that "Microchips are forever" and getting your pet micro-chipped is a no-brainer (IMHO). Feral Fixers also microchips Feral Cats and this story is a good example of why we do this.

Patches initially came to Feral Fixers in August 2012. He was TNRed and microchipped as part of a colony in Naperville. After his neuter surgery, he became more friendly with people and spent the next couple of years hanging out in the neighborhood looking for a place he wanted to call home. He found that place in the fall of 2014 - the home of Randy and Dee.

Initially Patches was quite shy and unsure of his interactions with his new-found friends. He was not used to much contact with humans. However, through slow and patient interactions and many evenings huddled under blankets on the deck, Randy and Dee won Patches trust, and soon Patches was curling up in the blankets with them. Given the two resident dogs, who are not particularly cat friendly, bringing Patches indoors was not an easy decision. Initially Randy and Dee provided him with warm outdoor enclosures. Ultimately, when the weather got very cold, they blocked off a section of their house where the dogs were not allowed, and brought Patches indoors over night. Patches clearly enjoyed his time outside, however, as he asked to go out and explore each day.

For the next year and a half, Patches enjoyed a very happy life as an indoor/outdoor cat - safely resting indoors at night and exploring outdoors during the day. Unfortunately, his outdoor explorations caught up with them one day in late February, when he never returned home. After several weeks of searching for him in the neighborhood, Randy and Dee contacted Animal Control and they directed them to Feral Fixers. Patches had been picked up by Animal Control, who scanned him for a microchip, and based on that microchip, turned him over to Feral Fixers. He was staying in a Feral Fixers foster home in Lombard. 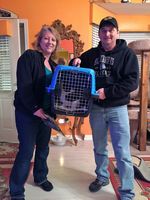 Once Randy and Dee learned of Patches where-abouts, they contacted Feral Fixers to bring him back home. They got his microchip number from Animal Control, so Feral Fixers was able to validate that this was their cat. Last night was the night of the reunion and subsequent adoption at the foster home in Lombard. Patches' foster mom described Patches as frozen - not mean or rejecting human interaction, but not welcoming it either. The situation was quite different after Randy and Dee spent some time in the room with Patches. Soon he was walking about with his tail in the air, talking to them and happily receiving petting and attention.

Patches was delighted to have his people back, and Randy and Dee were delighted to have him back. Fortunately, Patches' microchip made this all possible. To avoid a replay of this experience, Patches will become a strictly indoor cat now. His roaming days are over, but he is happily safe in the home and with the people he selected. He will have his own room, separate from the dogs, until/unless they begin to accept him.

While it is not Feral Fixers' goal to for the TNR'd cats to become friendly, our goal is to help all of the cats that we interact with to have the lives that they choose for themselves, inside or outside.

What a great story! Microchips are forever and that's a GOOD thing...

(Click on the picture thumbnail to see a full-size version)