Sue Lee, Feral Fixers Board Member and Adoption Coordinator sends us this wonderful story of Morton, an FIV+ cat they adopted from Feral Fixers in 2013. The story was sent by Morton's adopters, the Hales family and it shows, perhaps more than anything else could, that an FIV+ cat can make a wonderful pet.

It took us a year to get over Peanut’s death. He was our Bengal Tabby companion for over 15 years, with a lovely great tail and such a fast stride that he seemed to float over the ground. Eventually we started looking online for other cats that needed a home and happened across Morton, a 2-year-old part-Bengal Tabby at Feral Fixers. Poor Morton was looking very sad in a cage by himself as he was FIV positive. Nobody wanted him or even wanted to foster him. We didn’t know much about immune deficiency but we really wanted Morton. Sue was nervous of us when we said that we would take him, and he was nervous of us as we drove back to Winnetka with him in the car. He wouldn’t eat anything.

He spent the first night in our bathroom, as he had an upper respiratory infection and we were worried about him. It turned out that was why he wouldn’t eat anything – he couldn’t smell the food. Once we understood that a cat’s sense of smell acts as a switch, we tried putting his head inside a Whiskas bag and, bingo, he started to eat! As soon as his head came out of the bag he stopped! Slowly he got better and cheered up, a large-framed cat with big ears, a fierce look and a funny walk.

We then looked for a possible FIV positive companion for Morton, remembering the loneliness of Peanut after his companion cat had died some years before. After about a month we found FIV+ Lola, a sweet-natured 3-year-old female that again nobody wanted, isolated from others in a cage by herself at the Heartland Animal Shelter. It took a week or two of progressive introduction before we could let them be together, and although both had been neutered she wiggled her behind in his face and he reacted in the usual male way!

All this was nearly three years ago. We have been surprised and pleased to find that these two have been the healthiest cats we have ever had – at least so far. Both are more accepting of visitors than any of our previous cats and Morton is so proud of his expansive spotted tummy that he stretches out on the carpet to show off it off to everyone, even to complete strangers. 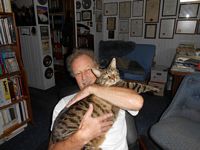 Morton doesn’t take to sitting on laps – unlike Lola – but he does insist on several big HUGS (lasting for several minutes) each day. Meanwhile Lola loves to play and is always looking for something to play with; when all else fails she sharpens her claws on a scratcher or leaps up the cat tree to survey the scene from on high.

We are lucky to have these two lovely cats and our initial concern about them being FIV positive has faded with time. Right from the start we were more watchful with these two than with our previous cats, making sure that bowls are always clean, their large litter box is always clean and that they don’t eat things that could create problems. Having established a happy relationship we hardly even think about it anymore and they certainly don’t!

With grateful thanks and all best wishes from Crispin, Cecile, Morton and Lola.