This past Thursday, Feral Fixers brought in 28 cats to the PAWS-Chicago Spay/Neuter clinic to be fixed. Feral Fixers president Tammy gives us the details, including an update on five kittens that were rescued by Feral Fixers.

Today Feral Fixers transported 28 cats to PAWS. Debbie & Charli made the AM trip and Dedra & Debbie did pickup.

There were 7 friendlies and 21 ferals. There were 19 males of which 3 were already neutered, of the ones neutered, 2 were cryptorchids.

There were 9 females of which 1 was already spayed.

The day ended with 5 five-day old bottle babies being brought to us that had been without a mom for over 24 hours and were thoroughly chilled. FYI, never try to feed a kitten until it is completely warmed up, they cannot handle food until then. The outlook is not good for these guys, but we will do our best. 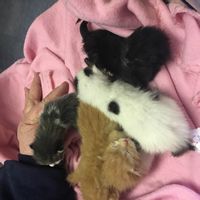 On Thursday evening, 5 kittens were brought to us. A realtor had realized there was a cat in an eviction house. The sheriff performing the eviction contacted Chicago Animal Control. Animal Control came and got the cat. The next day, Thursday, the realtor revisited the house and heard kittens. Called Animal Control, they refused to come out (that's is all that is known about that part of the story). Frantic calls were made, we were contacted. Got the kittens about 8PM. Never, never, ever, try to put anything in a kitten's mouth until it is warm. Ended up piling an electric blanket set on level 5 on top of them when they wouldn't warm up thru any other means for 2 more hours. Even then, gave them a little sugar water, only. Their first need was 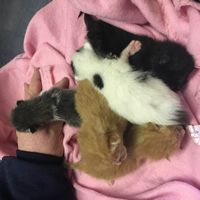 warmth, then fluids and then finally food, so in the AM, gave them formula diluted 1 to 6 (normal is 1 to 2), to be sure their systems could tolerate. Went well, 5mls is a lot when you weigh a couple of ounces! At 11AM, they went to West Suburban Humane Society to receive the excellent care they can give!

That is GREAT news about these kittens - hopefully they will continue to defy the odds which were against them. And thank you to our super-transport-volunteers Debbie, Charli, Debra and Debbie (again!).