Another four on a Sunday...

This past Sunday, Feral Fixers brought in four more cats to the PAWS-Chicago Spay/Neuter clinic to be fixed. Feral Fixers President Tammy gives us the details, including information about some unexpected kittens...

Debbie transported in the AM and Heather picked up. 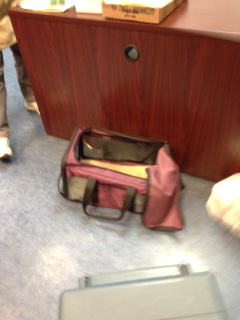 We try very hard to only go into PAWS on Thursdays and NOT on Sundays, both for PAWS - they are so busy on Sundays and for ourselves, so we get some sort of break. A cat was trapped ON Thursday this past week and we could not get her in on the same day and could not make her wait in the trap for days and days, so the next opportunity was Sunday and PAWS kindly agreed to let us bring in up to five. Debbie did transport this morning and on her way back out to her car after everything was done, she discovered a fabric carrier with movement inside. Her first guess was ten kittens were in it. She brought it inside and the she waited until the staff at PAWS could bring the cats upstairs. Final count - t h i r t e e n kittens in this carrier. In the heat. Someone else had just come inside in the last five minutes and didn't see it then. But what if? Kittens die quickly in the heat and thirteen little bodies and 80+ degrees and humidity is dangerous. This definitely falls into the land of "meant to be" and its wonderful that Debbie was in the right place at the right time and was observant enough to rescue these guys! A majority are white with other markings, calico, etc., PAWS should have no trouble placing them but they will need a lot of care to get them to that point - just a short stint of stress like this can affect a kitten's health!

Thanks Debbie! Thanks Heather! And thank you too, Tammy!

On July 6th, we brought in one Friendly Feral to the Glen Ellyn Animal Hospital to be spayed. Adding this to our totals, this gives us 99 cats spayed/neutered for July, 498 for the year and 7,776 since our inception.