One of the friendlies brought to PAWS in yesterday's trip to PAWS is Dryan (pronounced "Duran"). Feral Fixers president Tammy has the story on him...

A few weeks ago we got a call from a caretaker, a new cat was injured, could we help? It had a bad eye and was peeing blood - they saw it on the snow. 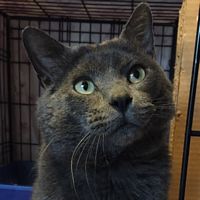 Dyran got a convenia shot for starters and was set up in a dog crate. And found to be an absolutely wonderful boy. Its amazing when an unneutered male purrs and kneads and is happy! He returned to the vet when his eye did not resolve - it was actually an abscess between his eyes, draining in the corner of one - yech! I know. It was aspirated to culture and we added another antibiotic. Except for the lightly shaved forehead, you would never know he ever had an issue. No sight of the bloody urine but its been a battle to get his digestion under control. Finally, today he was neutered, first step of many to getting a forever home! He is not available for adoption yet but we would love for him to have a foster home! He will have that male cat smell for awhile til it wears off

Clicking on the picture thumbnail will show you a larger version of the picture - he's a handsome guy, isn't he?