Yesterday I received a call from someone I had helped TEN years ago! This was before Feral Fixers existed and I was just receiving random word-of-mouth calls. I used Glen Ellyn Animal Hospital for the spay/neuters and helped offset the costs by making catnip knots and catnip stuffed squares for sale. I probably neutered 40? cats in a year? Most of this woman’s TNR’d cats are still alive and living outside but a new cat has shown up – so we will be working on him as soon as the weather allows. I had also helped this woman’s brother with cats, he lives close to a heavily wooded area – one of his cats is still coming around. Those are really long lives for feral cats, what great news!

Fast forward – and it really does seem fast – who knew that thousands of cats would be neutered with such humble beginnings?

It's not easy to communicate to others what we do, so I try to share some stories to illustrate just what Feral Fixers does, in addition to trapping cats.

We received a call from someone who said that there was an injured cat coming by. We got a trap out there but it took two weeks to trap this cat. She was trapped on a Sunday, taken to Glen Ellyn Animal Hospital on Monday. When the vet called, she asked if I had even seen the cat, did I want to before we moved forward? I did. The cat was lightly sedated but still aware and from handling sooo many cats, you can get an impression of who wants to be friendly or not just by how they react to touch. We discussed her leg, rear, left, as I stroked her neck and shoulders – there’s a certain kind of trembling they do as they get accustomed to the idea that, so, these people are going to touch me and its going to be okay. She had a fracture above the foot and infection to the bone on most of the leg with bruising around the leg socket. The only answer was amputation and due to the bruising it was not advisable to spay her at the same time – too much going on in that area already. She snap-tested negative, and we decided to move ahead with the amputation. She did very well with the surgery, which the vets stayed late to complete, she stayed there an additional 24 hours, did some hissing but allowed the technicians to put on and remove an Elizabethan collar several times, take her temperature (what could be more invasive than that!) and did not strike or growl. I had called West Suburban Humane Society before I ever left for GEAH and asked, if we took care of the surgery, would they consider taking her into their adoption program – she needed a foster that could give her individual attention – and they said if she was adoptable, sure! That Wednesday I picked up Sesame from GEAH, interacting with her a bit beforehand to make sure this was a good idea, took her to WSHS where they had a very comfy cage waiting. The next day she went to a foster and everything is going well. Look for Sesame among their adoptables in a few weeks! It takes a community to get these cats where they need to be! 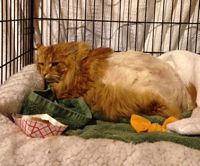 DuPage County Animal Care and Control called this past Monday, they had one of “our” cats. From the microchip number I knew that we had neutered him in 2012, he was from an apartment complex, his caretaker would let him inside on occasion and she had moved in 2014. The new information is that someone in that same complex had brought him inside for the last year and now had surrendered him to County. The staff said he was nice. I picked him up and off we went to the vet. He was a mass of knots and very scared. So, sedate, snap test, vaccinate & shave was the plan. Rusty now is sporting a lion cut and slowly gaining interest in his surroundings. I can hold him and he’s starting to feel safe enough to look around. At fifteen pounds he could do a lot of damage but has been terribly sweet and calm. Cats are sensitive creatures. Despite how kind the people at DPACC are, the cats know what happens there and often start shutting down so that they don’t have to care. It can take awhile for them to return to normal. I’m hoping he will come along quickly and we’ll have a foster that can take in this big guy so he can make the next steps in his journey.

Another call came from a woman who had taken in a kitten in the Fall, around the same time, her son brought home two kittens who happened to be female. The first kitten was male. “Eleven kittens in the closet” was the result. The male cat was neutered in January, the girls last week and this week seven of the kittens were taken to ADOPT in Naperville for fostering and adoption. The other four went to homes and we should be neutering them as soon as they are old enough.

These situations happen all year long, they stand out a little bit more because now is our “down” time. But cats get injured, cats decide to be friendly, kittens have kittens, cats get abandoned all the time. We do what we can to get them what they need in addition to making sure there are fewer and fewer every year. Due to the high volume of cats that we deal with, we have the experience to know who should be adopted, who should go back outside. Cats revert to “feral” after only a short time outside, we have the equipment to trap and house them until we know their true nature.

It's becoming clear that Feral Fixers needs a building. My experience has been that if you don’t ask, you don’t get. We have started discussion of what form a building would take. The big dream is to have a large building that would house an adoption area, holding area and a spay/neuter clinic. Think of all of the empty warehouses and car dealerships you pass. Plenty of parking and areas that cars could drive into and be protected as cats are moved in and out of vehicles. We could start in a house, many shelters have done so. We could start in a store front, that’s been suggested to us many times. These changes won’t happen tomorrow, it may take some time, but we cannot continue to operate with the limited resources of our volunteers homes and garages forever, in order to provide what the cats need, we need a building. We have started setting aside some donations in what we are temporarily calling a “Fund for the Future” – we may come up with a snappier name – when we get an unexpected large donation we will put it in that account. We would not be acting responsibly if we did not plan for change and this is one way that we are working towards that. Donations can be designated towards this Fund, simply give us those instructions when making a donation. Here is the start of our “ask”, keep it in the back of your minds, if you know someone that has the resources to help with this, tell them about us. If you don’t ask, you don’t get.

Once again, my letter to you has gone long. Just a bit more:

As always, thank you all for what YOU do for Feral Fixers!