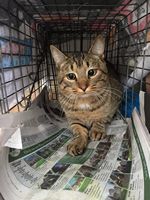 Today as we all know was National Feral Cat Day and to celebrate, Feral Fixers brought in another load of cats to the PAWS-Chicago Spay/Neuter clinic. Feral Fixers President Tammy tells us the story of the day's happenings...

It was a wacky day.

I went out to the garage to see brooms knocked over and some general disarray as I heard a cat scrambling around in the rafters. Damn! I wen thru each trap and finally found the small trap with the cave formed of the newspapers, empty of cat - but it was still locked! "Baby" had worked at that transfer door long enough that she had spread apart the clip to allow a full two inches of space to squeeze out under the door. Turns out that this cat had been trapped in a garbage can last week - sheesh, no wonder she had to get out! As I write this, she's still up in the rafters, the trap is set (different BIG trap), with a light shining on it - go towards the light, go towards the light! Keep your fingers crossed she goes in there tonight - gets pretty cold up there in the ceiling!

So all 14 ferals and 13 friendlies had to be carried out the side door instead of out the convenient garage door - she should have been too scared to dart past us, but you just never know. But [Super-volunteers] Charli and Cathi persevered and were on their way to PAWS in decent time.

The wackiness continued as a cat was in the middle of surgery and produced an abundance of watery diarrhea - PAWS went thru with the surgery but were very concerned and hyper vigilant, so two more friendlies did NOT get surgery due to diarrhea. 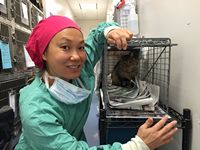 [Super-volunteers] Dedra & Rita & Judy picked up from PAWS and [super-volunteer] Cathi returned to snap some more pictures and help bring the cats in thru the side door because Baby had not cooperated yet.

Yes, cat number 7,000, Wamsetta, was spayed today - what a fabulous way to celebrate National Feral Cat Day! Feral Fixers is very proud of this accomplishment and we'll take this opportunity to say it again: THANK YOU FOR ALL OF YOUR SUPPORT - WE COULDN'T DO IT WITHOUT YOU!

(The picture thumbnails are, of course, of Wamsetta - number 7,000, along with Dr. Jessica Von Waldau, one of the awesome vets at PAWS. Click on either one to see a full-size version.)