Feral Fixers sent in 24 more cats to the PAWS-Chicago Spay/Neuter clinic this past Thursday for spay/neuter surgery. Feral Fixers president Tammy gives us the details:

We sent 24 cats to PAWS this morning (that Emma was a no-show again! hoping she's listening and will get in the carrier next week!), 12 ferals and 12 friendlies.

It was the fabulous team of Charli & Cathi in the AM and Dedra & Rita & Judy in the PM.

There were 12 females and 12 males but one of the friendlies was already neutered - a polydactyl with three additional toes on his back feet! Blondie, the already neutered cat, was literally plucked from the yard - was not happy about going in a carrier so they did not check his "equipment" very well :). He had no chip which was half an indicator that he was not neutered.

Just not enough time to get traps to people, so the load was light and PAWS finished up a little early today. 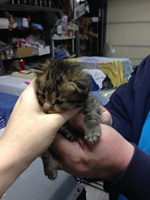 We also ended the day with super-trapper Diane making a run to Oak Brook to pick up SEVEN 3-week old kittens that had been discovered in a firepit when it was uncovered. This activity was sure to make the mom move the kittens = some left unprotected while she searched for another location = being at risk = we came and got them. Diane will be returning to trap the mom and the rest of the feral population, the neighbors had different pieces of the story - turns out there are more cats there than anyone knew! The planets were in the correct alignment and there was a foster available to bottle feed for a few days until they can (please cross your fingers) go to a shelter's foster system. All brown tabby Maine Coon types, each one cuter than the next. Just one of our many stories!

Thank you to the super-volunteers Charli, Cathi, Dedra, Rita & Judy!

This is the fifth year in a row that Feral Fixers has spayed/neutered more than 1,000 cats! Considering how late we got started this spring (due to the overly cold and long winter) and the fact that Tammy has had to deal with me not being able to do transport for the past several weeks, that's nothing short of amazing - Tammy, you're awesome! And, we're rapidly closing in on 7,000 cats total! Thank you to everyone for all of your support!