Feral Fixers brought in six more cats to the PAWS-Chicago Spay/Neuter clinic to be fixed today. Four of these cats were ferals while the other two were 'friendly ferals'. Tammy gives us the story of today's cats and their interaction with Feral Fixers and PAWS.

The end of the year arrives before we know it and PAWS was kind enough to schedule an extra day of surgery on Saturday. We hustled and managed to get six cats in.

Three of those cats have an interesting story. A woman called Friday and was looking for low-cost spay neuter. A relative had moved in with two cats, moved out abruptly, leaving the two behind and in a matter of days one of them gave birth to 5 kittens. These are in and out cats = kittens are not a surprise if the parties are not neutered. Since we were making a trip today (timing is everything!) and she could nab these guys easily, we planned for her to bring them this morning. She only had access to a very large carrier, and lo and behold, #3 got in too and would not leave without some effort - so she brought all three. We moved them into traps, since they are in/out, they went in as ferals to get an eartip to protect them. This is a very nice lady and now we will be working on the other cats surrounding her home as well. And, helping her when the kittens are large enough for s/n.

There is no such thing as just one cat, its like a single drop in the ocean, the ripples go on forever!

The male/female distribution of today's load was 50-50; three males and three females. Super-volunteers Maureen and Chris did the trips both ways today; picking up the cats from Tammy's in the morning and bringing them to PAWS and then picking them up from PAWS in the afternoon and bringing them back to Tammy's for recovery and distribution. Thanks Maureen! Thanks Chris! 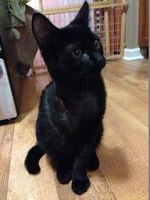 With these final six cats of August, Feral Fixers processed 94 cats for August (absolutely tremendous considering that we took a break earlier in the month and I'm out of the cat transportation basis, at least on a temporary basis), 818 for the year and 6,794 overall.

And, do you remember Chatter? Tammy tells us "Our friend Chatter has been in his foster for a week or so and is doing very well. We wanted to share an updated photo of him, so that everyone could see what tremendous progress he has made!" Click on the picture thumbnail to see a full-size picture of the handsome lad...