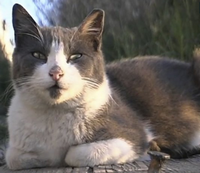 A new video about Feral Cats and Trap-Neuter-Return has recently been released by EarthViews Productions, Ten Lives - A Feral Cat Odyssey.

The Filmmaker describes it as: "TEN LIVES originally began as 9-Lives, a nine-part series of educational films on the humane management of feral cats produced by EarthVIews Productions for the San Francisco SPCA. As this series was distributed to animal shelters across the U.S., little of it reached the public. TEN LIVES utilized much of this educational material in a revamped format, along with original video and music score, to produce a contemporary portrait of the feral cat situation worldwide, concentrating not only on the issue, but on the tens of thousands of people who are dedicated to the humane management of feral cats through the highly effective TNR system, i.e., trap/neuter/return. The film was underwritten by grants from Friends of Animals, the American SPCA, and The Summerlee Foundation.

TEN LIVES is free to view on this website because it is essential that the negative myths about feral cats be revealed for what they truly are: myths! TEN LIVES will soon be available to all PBS stations across the United States free of charge."

Feral Fixers President Tammy McAuley has this to say about the film: "Every group and individual does TNR, cat care, etc. just a little differently but this is a wonderful overview of TNR and rescue and its local and global impact."

It's not a short film, nearly an hour in length, but is well worth your time.

We've also added a link to the film on our website. If you scroll down this website's Home page, on the left hand side you'll see a sub-menu entitled "Feral Cat Video" and underneath it a link to this film.

(Update - the website where this film was originally hosted at no longer exists - you can see the movie at Amazon now).