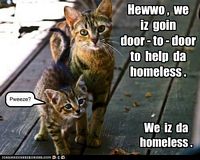 I rarely get the "opportunity" to trap but made the time on Wednesday at a location with an estimated 17 cats. What is it about the number 17? There's always more!

In an hour's time, 6 cats had ventured into the traps, one after the other (I usually only have two out at a time, so I was pretty busy). Finally, the pace slowed down and I was able to put traps at the cracked garage door - kittens inside! Over the next two hours, 2 teenagers and 4 ten-week olds made their way into the small traps. I left with a total of 13 cats, leaving traps behind for the caretakers to fill - if not with the "outside" ferals, then with the few cats that come and go thru the garage into the house. They brought 3 more cats - net total 16 (for now, there's still 5 +/- there). The 4 ten-week olds could have been TNR'd but it would have been realllllly rough on them. They are now in a big pet taxi, hoping for a foster until they are a bit bigger and friendlier. Of the other cats trapped for Thursday - two more 3+month olds want to make the leap to living inside. 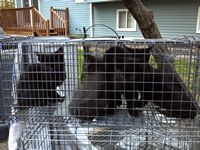 On top of that, two cats that were spayed on Tuesday are enjoying the idea of being warm and fed and danger-free! Between Tuesday and Thursday, we ended up with EIGHT friendlies out of a total of 54 cats trapped (two more were too ill to go for surgery) and we are already returning a super-friendly huge black and white male for now and telling caretakers that maybe in a couple weeks we can find fosters/shelters for cats that have been neutered previously and are now demanding to come indoors. This has been a very unusual year!

Thank you to everyone who helps us do this - tell more people to come join in the fun!!!!