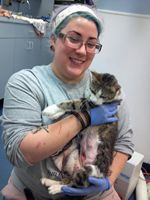 Wednesday's batch consisted of 20 friendlies and two ferals. Super-volunteer Dedra helped me pick up the cats from Tammy's and take them to PAWS in the morning (Thanks Dedra!) and then she did double-duty by helping me pick them up from PAWS in the evening and bring them back to Tammy's for recovery and distribution (Thanks again Dedra!). One of the friendlies was deemed to be too ill for surgery, so we wound up with PAWS doing 21 Spay/Neuters of Feral Fixers cats that day.

And today, we brought in 28 more cats to PAWS; 10 of them were friendlies while the other 18 were ferals. Super-volunteers Charli and Jennifer picked up the cats from Tammy's this morning and brought them to PAWS (Thanks Charli! Thanks Jennifer!) while super-volunteer Dedra again helped me pick up the cats from PAWS this evening and bring them back to Tammy's for recovery and distribution (Thanks Dedra!).

And as always, super-volunteer Judy was at Tammy's both mornings and evenings helping out with all of the tasks necessary to make this all work - Thanks Judy! And, there was "another Judy" helping out on Wednesday evening at Tammy's (Thanks Judy!). We have now, I think, three volunteers named Judy - and they're all great!

With these 49 cats, Feral Fixers finished up the month of August with 202 cats in total, the second month we've ever exceeded 200 cats and our biggest month of the year. For the year now, we've done exactly 800 cats and overall, we've done 5,533 cats.

One final note; on Wednesday we brought in our 5,500th cat, "Kittykins", a feral. Shown here is a thumbnail photograph of Kittykins waking up after surgery - she's being held by one of the awesome PAWS Vet techs, Lisa.

(Click on the picture thumbnail to see a full-size version of the picture.)