We are up against a wall!!! 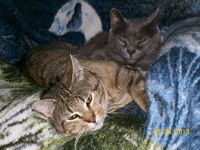 One of our fosters, who we met thru TNRing their cats, has had their closing date moved up. They are moving THIS WEEKEND! So, we not only have to find a new foster for the cats that they are fostering, but, we have to relocate their ferals. Talk about pressure!

Jackson & Indigo are both male cats. 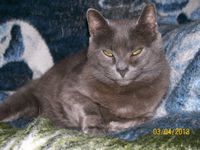 Jackson has been with us for over a year. He is a former feral that had some trouble initially communicating just how much he loved human attention - cats show love by biting, so don't humans? We are well past the biting but if he does not get enough attention he will try to grab your hand with his paw - hey! need you! Jackson is FIV+ and to help his food sensitivities, he is on a special diet. He is a beautiful, intelligent 4+ yr old large gray cat. 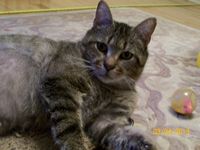 Indigo came to us in late summer. His caretakers had been trying to trap him ever since they saw that he was covered in blue paint. He was very trap savvy and by the time they caught him, he had cleaned (read consumed) the paint off and had become friendly. They brought him to us. He has gone thru a lot as the paint affected his immune system, etc. I've included a picture of when the skin sloughed off his nose and he drooled for a month. We got past that and then he started to lose his hair. We think that the best resolution for that is again a special diet, the hair has started coming back since he was switched to duck only. He is another demanding boy. He wants you to hold him and love him. He's three to four years old.

Indigo and Jackson have been together for two weeks and have started to bond very well, they are now grooming each other and have been being very good guests. Jackson has been in this foster for about 8 months.

It would be absolutely devastating to these cats to be put into cages at this stage. They spent so much time there as their health and behavior stabilized, it would really seem to be a step back to them now.

It is a very tall order to ask someone to take in two male cats with health issues, but the benefits to the person who would do that are endless! We know that special home is out there, can you spread the word so that it shows up right away?