Yesterday, Feral Fixers sent in 25 more cats to the PAWS-Chicago Spay/Neuter clinic to be fixed. Feral Fixers president Tammy gives us the details:

Started the morning with 8 ferals and 17 friendlies. One friendly had an inflamed gland in his neck, decided not to send him in. Minutes after the transport left, got a call that a female had been trapped. After giving it some thought, I called PAWS and asked if she could still come in the early afternoon - PM transport bringing her with and hanging out for longer than usual (Debbie) so that she could get done and got the okay! So we ended the day with 9 ferals and 16 friendlies. 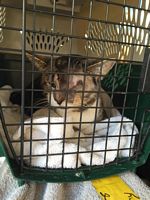 One of the friendlies has had a bad eye for ever. PAWS asked if we wanted them to remove it - this is not something they can do all the time, it is very rare and we are so thankful that he got his neuter and the rest of the package and he won't be in pain from his eye any longer. Of course, he still needs an extreme dental, but that is for the local vet to take care of. They did a wonderful job on it and Chewy is going to feel a lot better overall starting today!

We had 11 males and 14 females. Debbie and Charli transported in the AM and Debbie and Cathi did pickup.

Thanks Charli! Thanks Debbie! Thanks Cathi! Thanks (again) Debbie! And thank you to Tammy!!!

(The picture thumbnail is of Chewy - click on it to see a full-size version - Thank you PAWS!)